So You Want to Take Your Dog to a Dog Park?
By Stacey Sheeketski
(Recycled Pets NorCal foster and Intake Coordinator and volunteer for Pit Bulls Against Misinformation)

Dog parks are well maintained and provide stimulation, a new environment, and socialization for your dog, but there are dangers you may not be aware of lurking in that lush grass. Below I have explained the top five reasons I have never and will never take my dogs to a dog park (and suggest you don’t either!).

You may take your dog to the vet every year for an annual check-up and keep him current with his vaccines, but you can’t guarantee everyone else does. No vaccine is 100% effective, nor does it prevent your dog from getting distemper or rabies altogether. Then there are fleas and the myriad of parasites like roundworm, tapeworm, whipworm, hookworm, and giardia, all easily contracted through contact, feces (think picking up a ball that rolled in poop), or standing water. Roundworm can be deadly to small children and if you’ve ever dealt with a bout of giardia, you know you never want to go there again.

Link to a list and explanation of parasites found in dogs and cats.

Link to a list of parasites that can be transferred from dogs to humans. 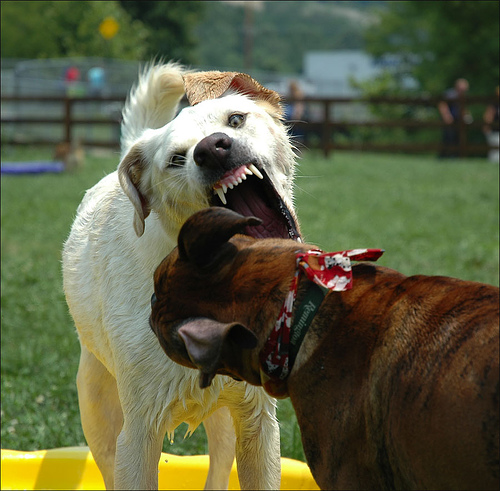 Not every dog gets along, just like not every human likes everyone she meets. You could have the best behaved, most social dog, but all it takes is an obnoxious dog with no social skills to make your dog react negatively, or that dog have a problem with yours. I have personally witnessed a happy dog chasing a ball his owner threw, only to be chased and attacked by a dog with a high prey drive that was not so keen on his enthusiasm.  Dogs can be protective of their owners and get upset when another dog approaches. Some dogs are possessive of their toys and don’t like to share. Some dogs have little tolerance for excited or scared dogs. The most important thing to keep in mind is that one negative interaction with another dog can turn the most balanced dog into a fearful or aggressive mess and it is rare that a dog is ever the same after a traumatic incident with another dog. 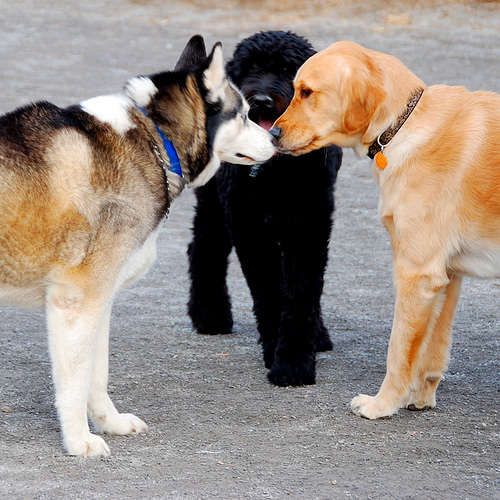 Every dog park I’ve been to has at least one neighborhood dog that has decided that the park is his place to be. With no owner present (and no way to find him), good luck collecting damages if the dog injures you or your dog. Since responsible ownership is obviously not present in these cases, you face the risk of that dog not having reliable tag information, not being licensed, being in-tact, not properly socialized, and not current on vaccines. Some shelters have an attached dog park and many a dumped dog has been found loose in the park the next day by park-goers and their dogs.

When people realize they have an unsocialized dog, their first reaction is to take the dog to a dog park, where their dog will be exposed to a lot of dogs and will work it out. People use the dog park as a way to exercise their dog, but don’t always interact with their dogs. A lot of people are on their phones, are reading or playing games, and are not supervising their dog. Those knowledgeable about dog behavior can spot potential problems in advance and act to prevent them, but not if they aren’t paying attention.

In California, dogs are considered property, and you, the owner, are responsible for any damage your dog may cause. This includes damage to the park itself and injuries your dog causes to a person or other dog. People have become quite sue-happy and some cases result in the owner paying tens of thousands of dollars for the victim’s medical care and pain and suffering. The last story I heard about was a woman who sued a fellow dog park patron because his dog bumped into her, causing her to spill hot coffee all over herself.

I could go into more detail, but I think you get the point. While your local dog park looks inviting and sounds like a good idea, it just isn’t. Many owners have used dog parks for decades and have never had a problem. I personally am not willing to take the chance that I will have to deal with giardia. Or badly behaved dogs. Or being sued over coffee. 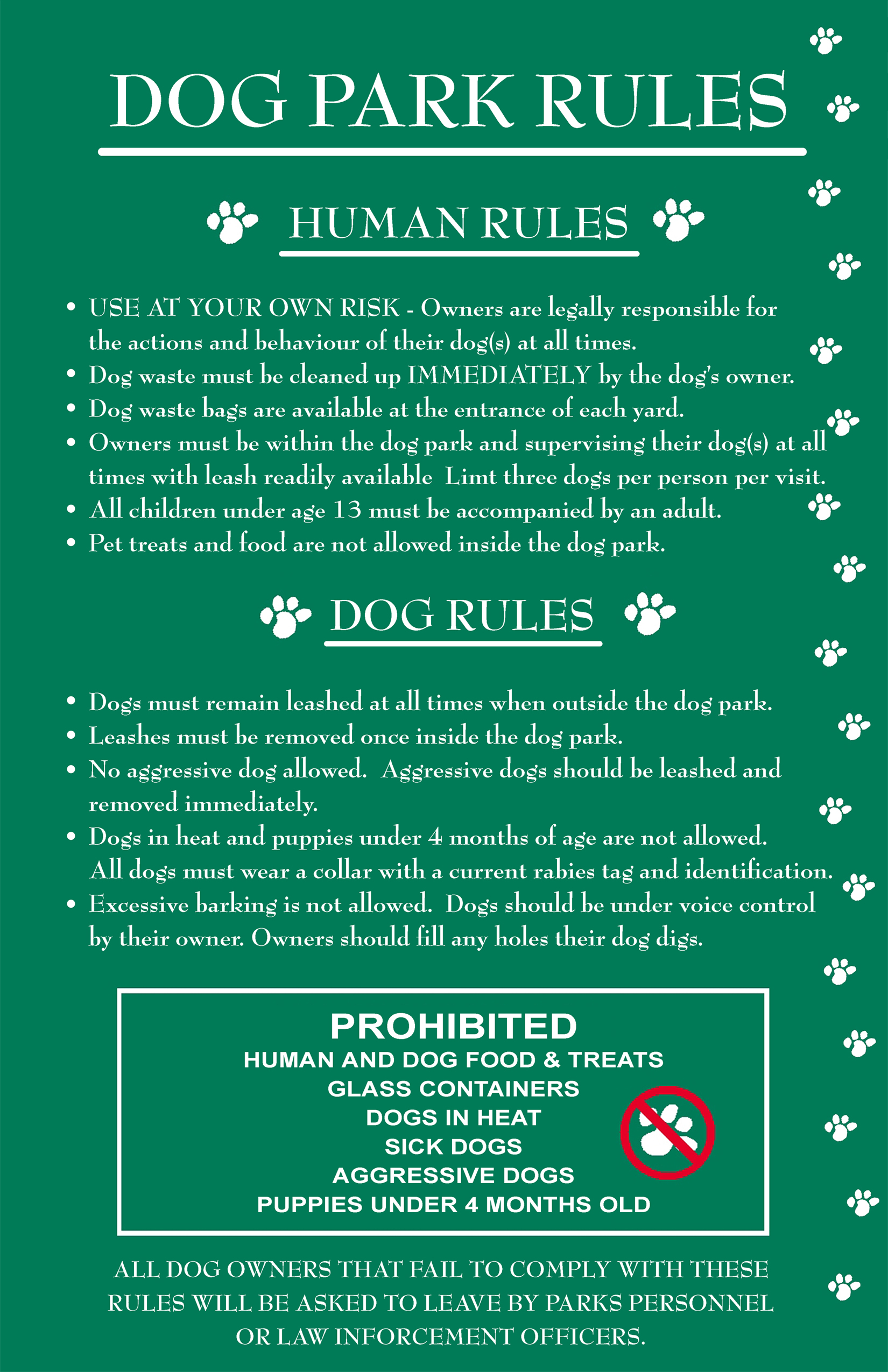 Did you know there are dog park rules?

Every dog park I’ve been to has rules listed to try to prevent some of the above problems that can occur. However, with no one to enforce these rules, some people seem to think its ok to just ignore them – if they even care to know they exist. This is an example of dog park rules (from Bark Park on Bradshaw in Sacramento):

I have witnessed 5 of these rules being ignored just sitting in the parking lot one day waiting to pick up my foster dog from the shelter next door. I also witnessed people on their phones, kids running around, and a dog fight. I was only there for 15 minutes! One time my partner was dropping off foster puppies for spay and neuter appointments and she heard commotion coming from the dog park. She ran over to find a woman bleeding and in need of medical care from trying to break up a dog fight.

Alternatives to using a dog park

Any dog can be dog reactive, but it’s in the Terrier’s blood. No not every Terrier will exhibit dog reactivity or aggression, but it’s not a good idea to test it out in an uncontrolled setting with multiple dogs.

Those with dogs that resemble a Pit Bull, Doberman, German Shepherd, Rottweiler, Staffordshire Terrier, American Bulldog, or Staffordshire Bull Terrier, should be prepared for negativity/nervousness from other park patrons, due to social stigma placed on these dogs. Also be prepared for any altercation at a dog park to be your dog’s fault (whether it is or not) and not getting a fair shake in small claims court. Discrimination against certain breeds is rampant and you may leave with more than nasty stares and derogatory comments aimed your way. It’s just not worth it.

I have been fearful of dog parks for years.  I personally took my cousin’s dog (as well as my own) to the dog park years ago and there was a fight.  In the end, one dog needed stitches and my hands were so swollen and hurt from trying to break it up.  I have been nervous about dog parks ever since. A few years ago, I tried to take my two dogs to a dog park and get over my anxiety about it.  I found it extremely frustrating how people would bring in tiny puppies (unvaccinated), would take dogs in and out on leashes causing aggression, and would not watch their dogs. It was an outlet for owners, most of which who have not properly trained their dogs, to bring their overly excited dogs somewhere.  I, in comparison, exercised my dogs beforehand so it would be about socialization. The last straw for me was having 3 huskies (a true pack) come up and began circling my dog.  Knowing that a pack of dogs is the most dangerous, I really thought they were going to attack him, and I realized that it just was not worth it to me. I decided that fostering dogs provides enough socialization and within a safe and controlled environment and I would no longer risk the safety of my dogs or myself.  I also now carry SprayShield in my purse after having to break up a dog fight, at the shelter’s dog park.  SprayShield should be carried if you are going to take your dog to the dog park as it is a safe way to deter and stop dog fights (you can buy it on amazon at: http://www.amazon.com/Petsafe-Sprayshield-Animal-Deterrent-Spray/dp/B0009YSB9O/ref=sr_1_1?ie=UTF8&qid=1366063343&sr=8-1&keywords=sprayshield). As it is generally the humans injured in dog fights, it is not only to protect your dogs but, more importantly, yourself.  It is sad to me that many people do not learn the problems of dog parks, until it is too late.