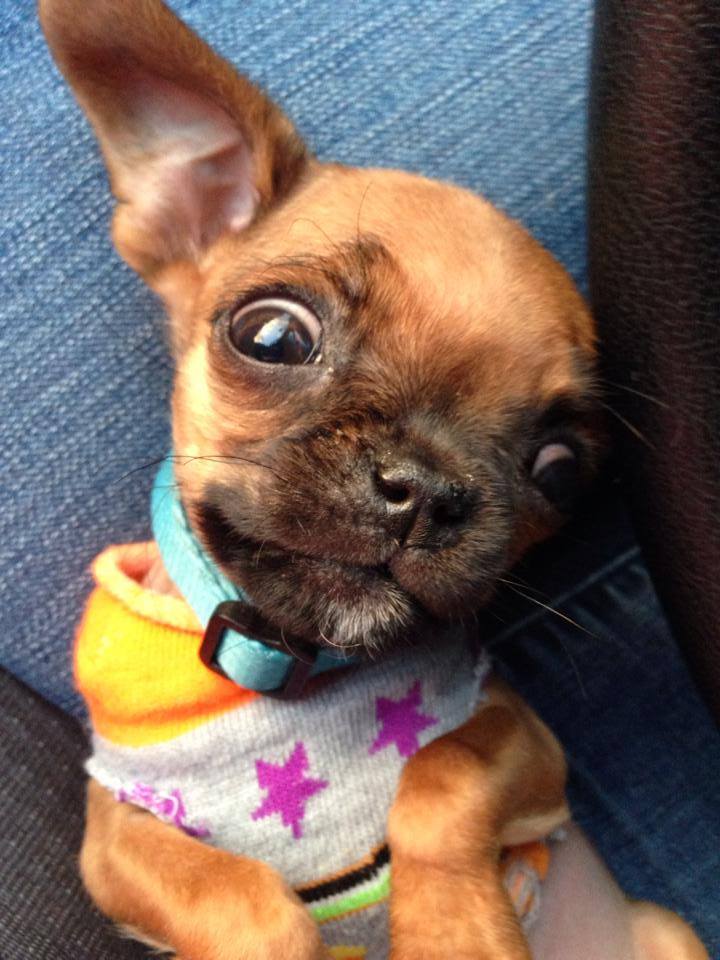 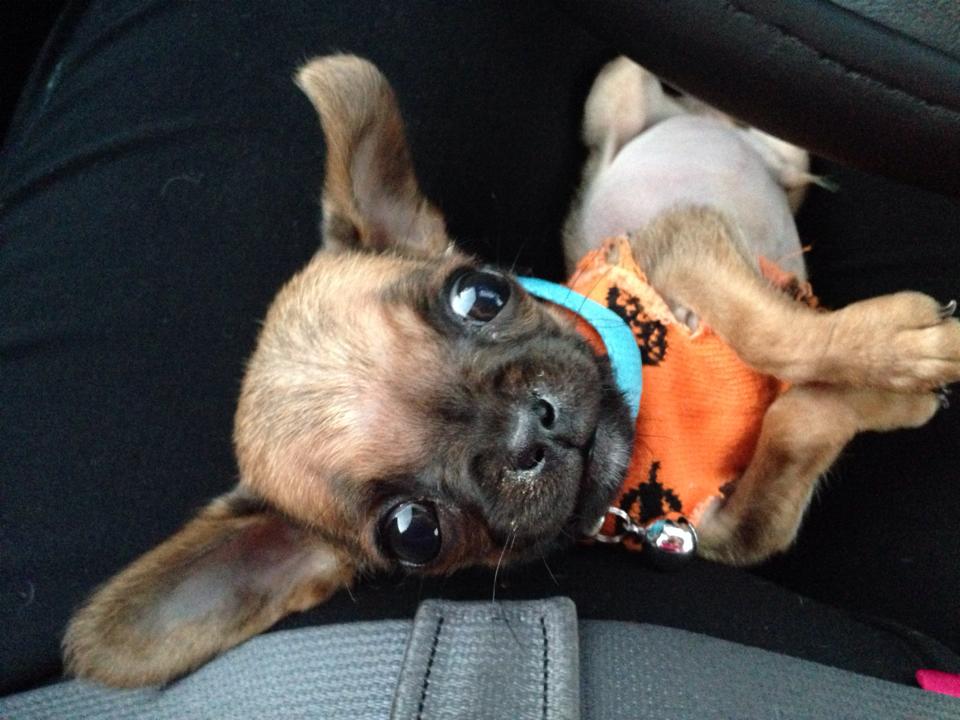 Bowser came into the world against all odds.  He was born in crate and stayed there alone for 5 hours while his mom received emergency care, and no one knew he was there. That should have been enough to kill him, but it didn’t.  Bowser wasn’t just a normal Pugalier (mom was a Pug and dad was a Cavalier King Charles Spaniel), besides being born in that crate, he was born tiny and with a cleft palate.  His breeder found out at 2 days and immediately started seeking rescue help for him.  At 3 days old, this 5 ounce puppy came into my life.  Tube feeding every 2 hours, is not easy- this is probably why nearly ALL cleft palate puppies are euthanized (often at the recommendation of veterinarians). It was not easy, for the puppy or the caretakers, but there is a lot to be learned.  Bowser may have been tiny in size, but he carried with him a huge voice (not literally as the cleft palate means he couldn’t bark) but he opened people’s eyes about cleft palate dogs and that was his purpose. 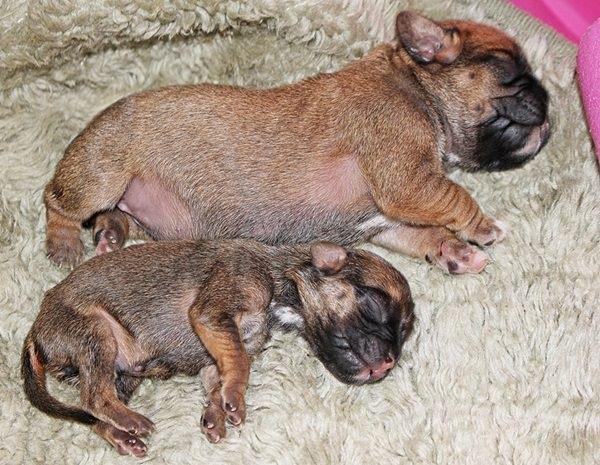 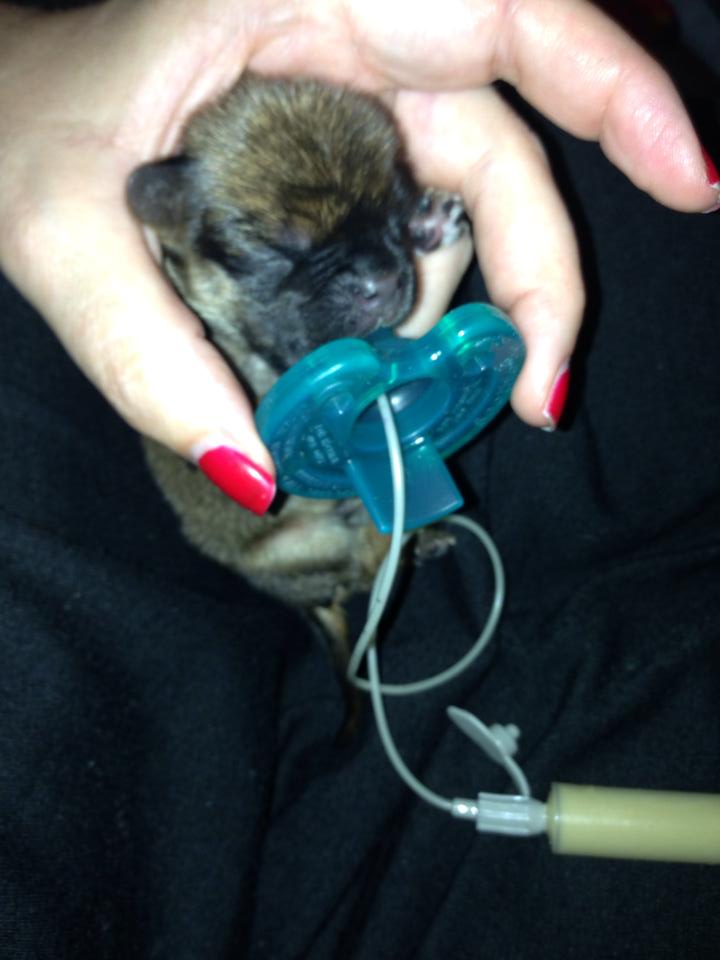 Some people know this, and others do not, but all my work in rescue is volunteer work. My “real” job is working at Shriners Hospital for Children, and one of the specialties is children with cleft palates. My job means I am well versed on the research and causes of cleft palates in humans, and dogs aren’t that much different.  Only, in our society where animals are still viewed as possessions, the way they are handled is very different. Sadly, most veterinarians do not even know about care or prognosis for cleft palate dogs.  Since Bowser came into my home on August 12th, I have spoken to many vets. The first one said “well, how are you going to feed him?”  And I was shocked that tube feeding was not thought of; however, later I took in another cleft lip and palate puppy named Seraphina.  Her owner was committed to helping her, but the vet told her to bottle feed a puppy (who has a complete unilateral cleft lip and palate which is pretty severe). Bottle feeding opened up for milk to get into her nose and so into her lungs. She basically had pneumonia since the beginning. Take that and lack of colostrum from her mom and her immune system was completely shut down.  So that poor advice may have been what led to her death.  Another veterinarian said to me that he didn’t not know that dogs with cleft palates could live.  If you have followed the story of Lentil on Facebook, or seen the work the Mia Foundation does, you would know that is not that case.  So Bowser’s job was to open the eyes of people (who always wanted to talk to him as he was super tiny and cute) and also veterinarians. 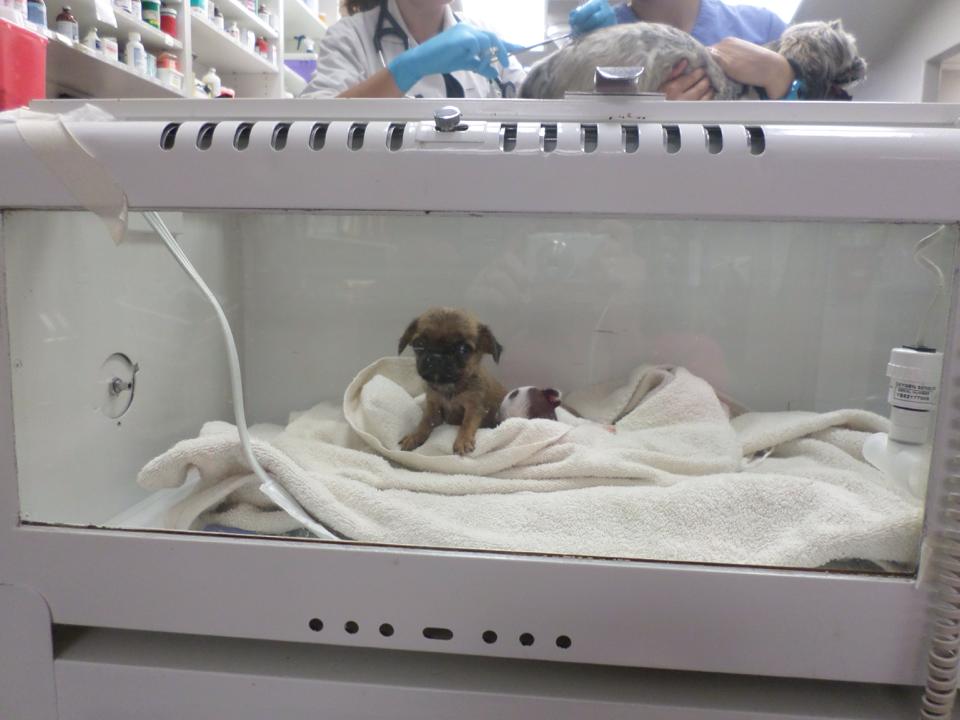 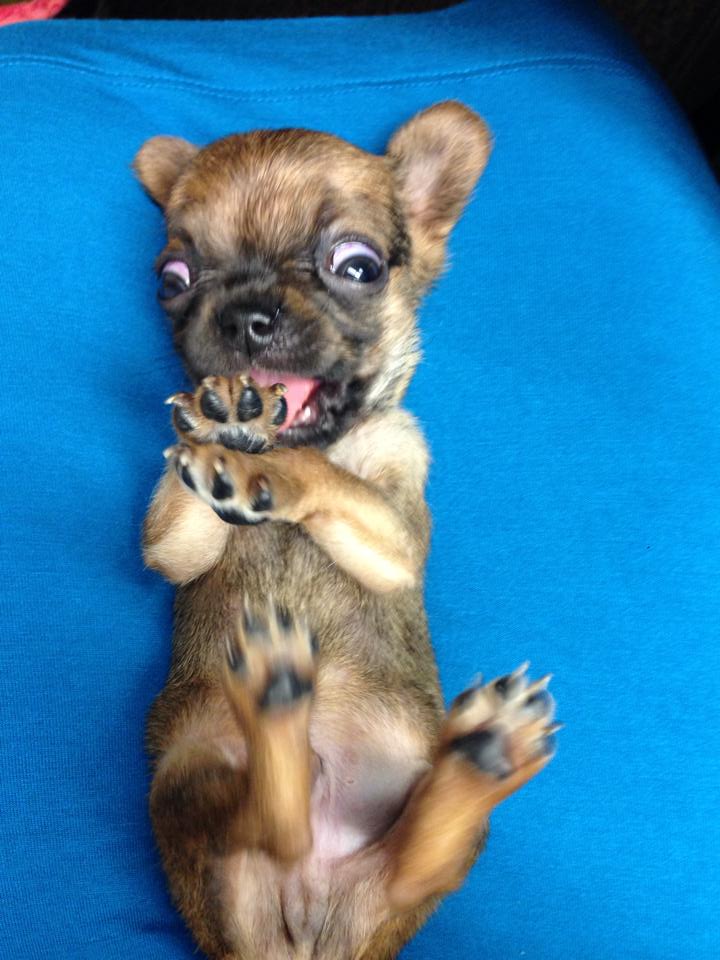 I am not saying it was easy at all. September 7th was the first time Bowser was admitted to the hospital, with Aspiration Pneumonia.  This is one of the biggest problems for dogs with cleft palates. Tube feeding is an art, you have to do small amounts to make sure not to over feed. Staying in a clinic can be mighty expensive so they can also be cost prohibitive as well.  2 weeks later, Bowser was once again hospitalized for aspiration pneumonia. It was at that point in time, I decided to do something different. The only thing the vet had that I did not was oxygen. So I went online and found an ICU tank, and went on craigslist to find an oxygen concentrator.  That was the best $600 I may have ever spent in rescue.  This is a purchase I would definitely suggest for any cleft palate pet parent.  Bowser, like most cleft palate dogs, had to deal with lots of sinus infections.  He got to the point where we wanted him to eat food (often cleft palate dogs are weaned early as it is less dangerous to eat then to have the possibility of liquid on the lungs.  But, most cleft palate pups are much bigger than Bowser so it is easier for them to eat kibble (soft food will squish up in there and so you really want food they can swallow whole).  It took him until 3 weeks old to reach 6 ozs and he was super slow growing.  We started with Fresh Pet food (tiny little meatballs, not hard and not soft).  Hard food is problematic because if they chew it, little bits can also go into the palate (and out the nose). 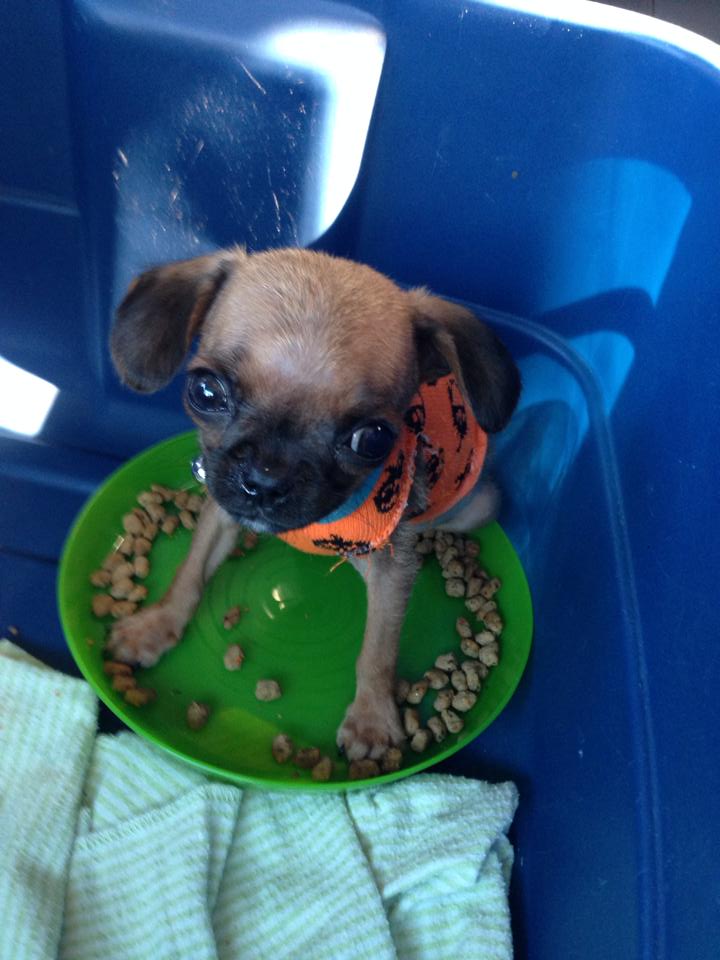 Bowser began losing his hair.  I wasn’t sure what was causing it; I thought maybe it was a food allergy.  So we changed foods often, we tried everything from baby dog food to raw food, but the hair didn’t grow back.  Thinking this may be a sign of something else, we had blood and urine tests on them.  They found the worst thing… nothing.  His thyroid was a little off, his proteins were a little off, and there were some crystals in his urine but not enough to worry about. Obviously, we know based on his size there was something else going on, but no idea what it was.  So just pushed forward waiting for surgery. 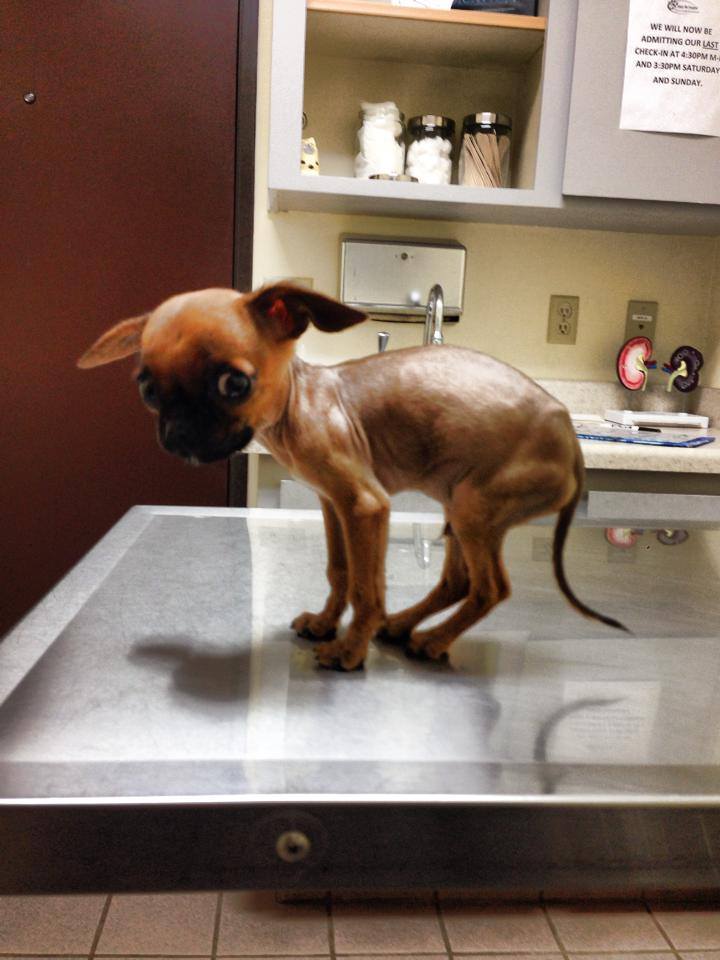 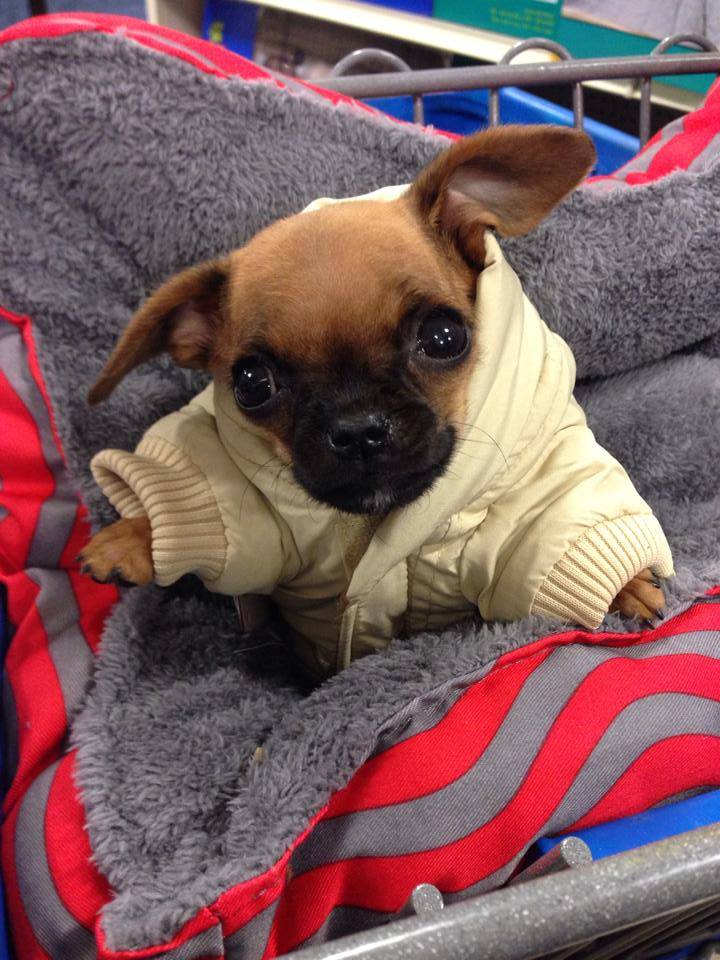 Being so close to UC Davis, one of the most amazing veterinarian hospitals around, they were obviously my first call for Bowser.  I spoke to their dental department about setting up an appointment. In my research, I had seen places wait until 4 months to do the surgery (although on the Cleft Palate pups, Parents and Supporters group there are many that have surgeries as young as 5 weeks).  The cleft can continue to close on its own, but UCD explained that they like to wait until there are adult teeth before doing the surgery (so the youngest they want to do it is 6 months).  The surgeon at my primary vet wanted to wait until at least 5 months.  So, if you have a cleft palate puppy, you might have to care for them for months.  Bowser made that easy.  It was hard when he was sick to watch him be sad, but when he was healthy he would attack your face and just be silly.  He wasn’t a normal dog, he was a spoiled brat (he started going to daycare when released from the hospital the first time and went there to be loved on and played with).  He didn’t care about food for about the first 3 months, and then he would attack your food and try to steal it (and usually if it was the right size, texture or whatever, we allowed it). 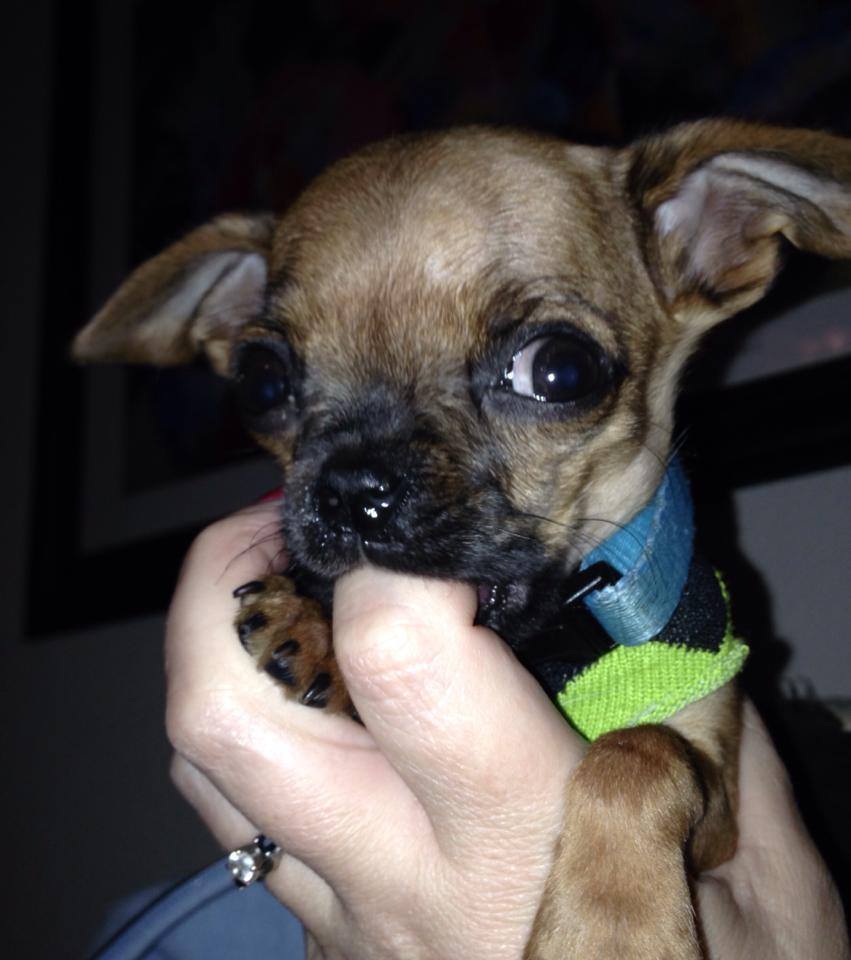 Poor Bowser ended up with pneumonia again, the vet thinks he has Aspiration Pneumonia. It was because his immunocompromised body got kennel cough. Oftentimes he would shoot milk out of his nose (and we would torture him by using those green bulb aspirators to get it out) when he was tube fed. But with it being stuffy, perhaps the milk went down instead of out.  Of course there is a lot of guilt on my part, I took in a mom and pups from the shelter, who showed no signs of kennel cough but 5 days later everyone started coughing.  Christmas morning Bowser would no longer eat and he was struggling for breath. He was on meds for the kennel cough, but that didn’t touch pneumonia. He was rushed to the emergency vet. Sadly, his body had had enough and at 1 am on December 26th, he died.  If I wasn’t in rescue and he hadn’t gotten kennel cough, would he still be alive? This is a question I will probably ask myself forever.  Who knows?  Would I do it all over again and take on Bowser?  Absolutely (but I would not take shelter animals until quarantined).  He was a lot of work, he was my 24/7 shadow. He gave me black circles around my eyes and probably a few extra wrinkles and gray hairs and a few pounds too, but he also gave me a lot of laughs and most importantly, he gave love.  His diminutive stature didn’t mean he had less love (or poop, lord he pooped a lot) to share.  He was a mama’s boy, although, did enjoy hanging out with his dad, Nick, and loved his other mom at daycare Jesse and her son Jayden.  He was spoiled by all and he touched the lives of so many.  I just hope that he has opened up enough people’s eyes about cleft palate dogs, to the point that he may save one more dog’s life, because a vet will know better how to care for them. That an animal’s owner will say that this doesn’t have to be a death sentence and choose to learn to tube feed or get the help that they need,  then his life is not in vain.

A huge thank you to everyone who has supported us on this journey, and especially to Jesse Jones. Not only for your watching him and making his clothes, and just taking such amazing care of him means that he lived so much in his very short life. 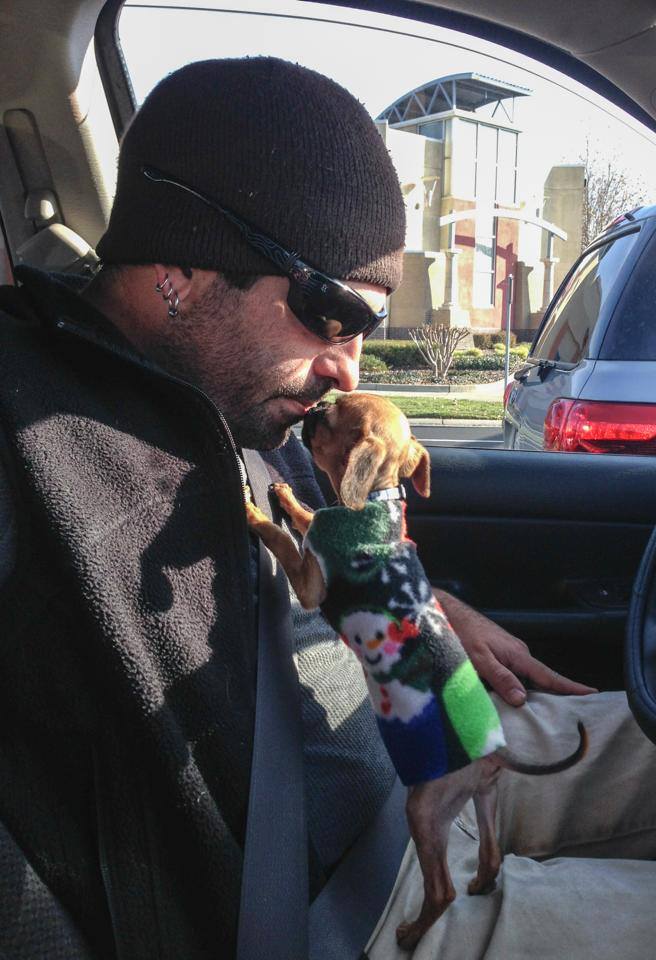 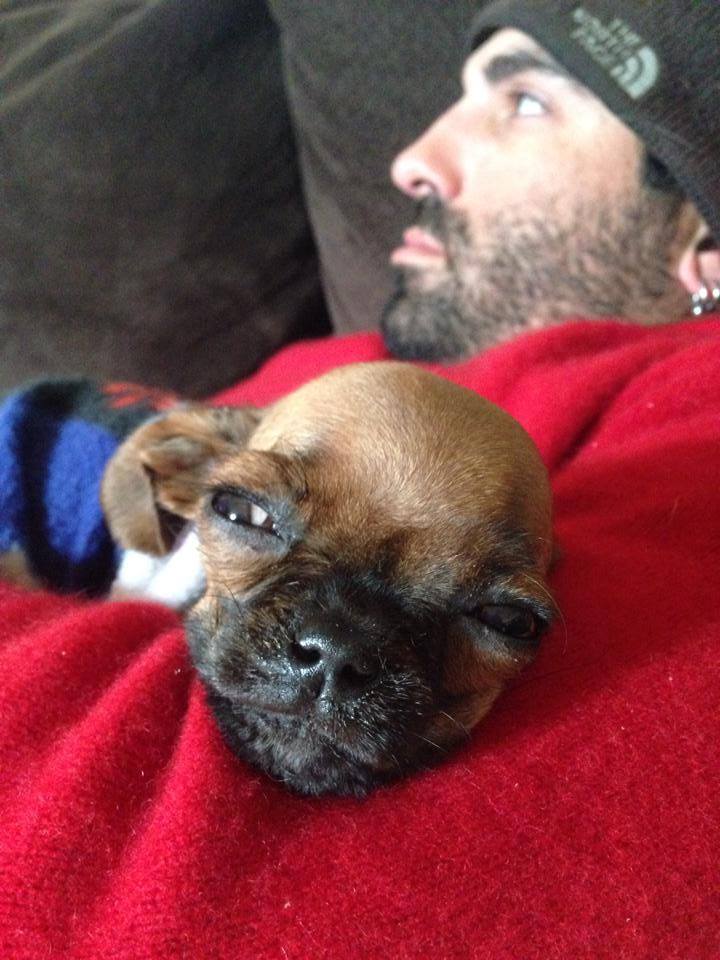 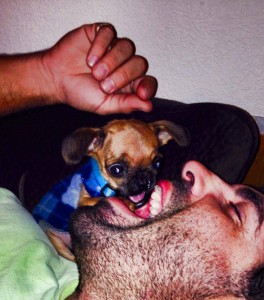 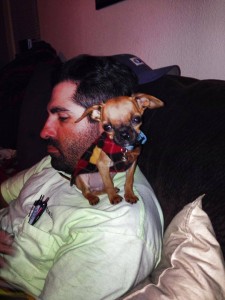 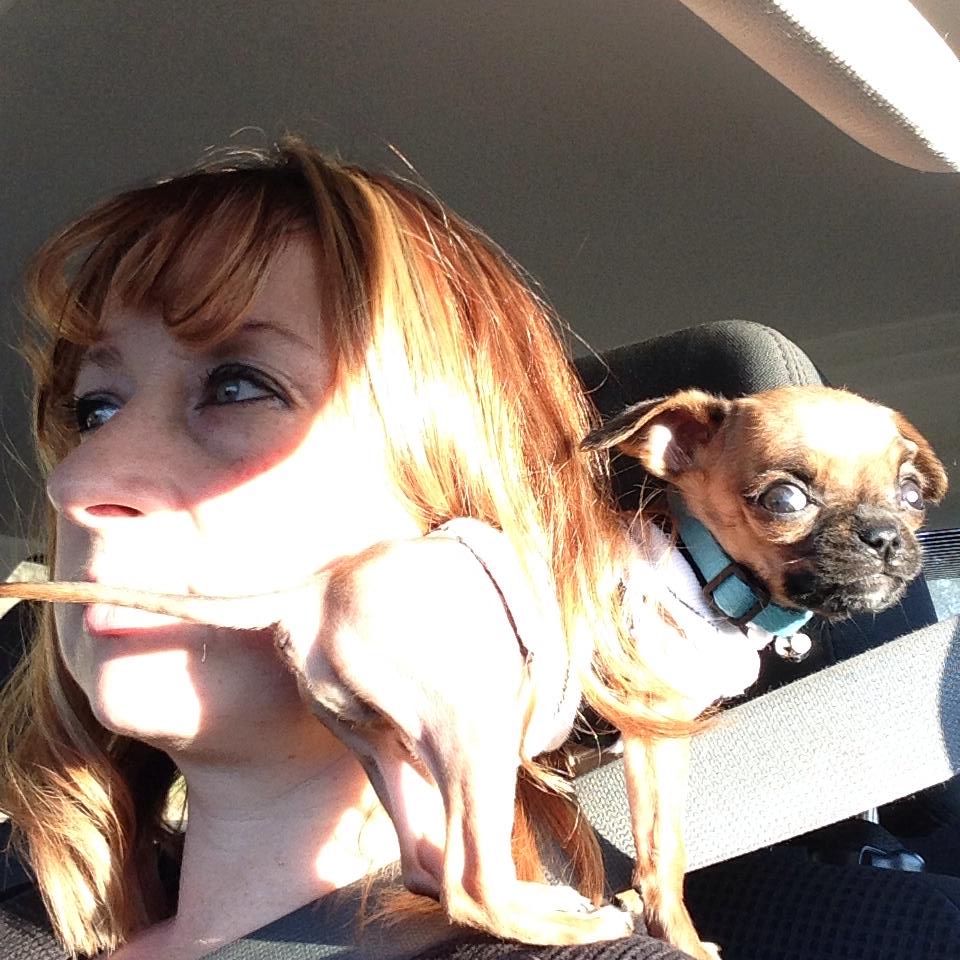 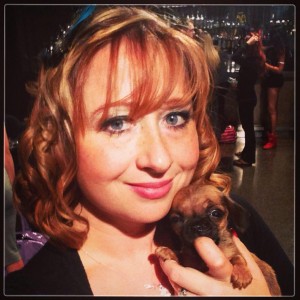 Rest in Peace Bowser, you were tiny but left a HUGE hole in my heart. I never imagined me having you forever, or what you were going to be like as an adult, nor could I imagine you being somewhere else. Perhaps my soul was preparing me for your fate.   I will see you over the rainbow bridge, and I am sure you will be reborn… as a mastiff.

If you would like to make a donation to pay for Bowser’s expensive vet care, and to help other animals in need, you can do so at www.recycledpetsnorcal.org/donate