Importance of a name

As someone who has an unusual name (I was named after my great-grandmother who was named after her second cousin), I might be more aware how names can affect someone. Elsie, the famous cow, was not the namesake that people thought was cool (and I am sure you will be shocked when I say it solicited a lot of ridicule). Of course, as an adult, I am no longer upset that my unusual name means I cannot find souvenirs with my name on it (short of tombstones but they frown upon you taking those) but perhaps that is one reason I am very picky about names. But does it matter what you name a dog? In short, yes. And not just because it makes me insane when I spend 2 hours finding the perfect name for that purebred German Shepherd (looking through German names in baby books), to have an adopter pick 21 seconds to decide Daisy is a great name! But there can be other effects of naming dogs that some people do not think of.

As a rescuer, I realize I cannot give a dog any name that stirs up negative thoughts in people. Give me a dog named Chewy and he will be coming to Charlie in no time. Other names that I have gotten which were changed immediately include: Taz, Puddles, Yappers, and Snappy. Clearly these names would make people think something about the dog which might not even fit their personality but they would be judged for it. People do not have the same ideas in their head when you name a dog Misty or Billy. But these judgments are not just made by adopters but people all around you.

Those judgments are why I believe it is super important that adopters (especially of power breeds) to forgo “tough” names, because people have one idea about these breeds –and often are fearful—but it is one thing to see a Rottweiler running at you, and it is another thing to have the owner calling “Cujo” to come back. Fear is very real, and we see that in our country where police officers –out of fear—shoot dogs every day. If Killer is running after someone, they are going to be more likely to be on the offensive, and it is not just police but could be your neighbors, veterinarian or anyone else who comes into contact with them. Of course, there are those people who want “tough” looking dogs and keep them as an accessory and want people to be afraid of them, so they love the name Crusher, Diablo or Beast; however, I do not think most people understand the problems that can arise.

If your Pit Bull gets lost, and you post signs “Missing Dog: Comes to Zombie” people will automatically think flesh-eater and not want to help. I made this argument with my husband who wanted spiked collars on our big dogs and I refused to let him knowing I have seen people flat out refused to help a power breed wearing one because they believed they were dangerous. Of course, my dogs are indoors 99% of the time, but it still was not worth it to me.

Size matters! Don’t listen to your girlfriend. Our 4th dog is a chiweenie, so I got him a spiked collar (because I don’t think anyone is going to be afraid of a 14 lb dog in an argyle sweater even with a spiked collar). This dog named Vaughn (which is English for “little” as he was tiny when I rescued him from a shelter) actually goes by the name Monster. His full name is Vaughnster Monster Awesome Possum. Monster only came from rhyming, and possum because he is super submissive and rolls over. So clearly anyone who sees this 14 pound dog, who rolls over when scared, is not going to be concerned if we call him by his nickname. But, if our Pit Bull/ Rottweiler (who gets super excited and noisy when people come over) were to be nicknamed Monster, I can promise that less people would be walking into my house! I actually tested this a little by giving Pit Bulls names associated more with Poodles, and people laughed, but it makes a difference.

What should you name your dog?

-2 syllables
Not only are long of names are just a lot of work, and exhausting to say. Plus dogs don’t understand 4 syllables so keep it short and sweet. I also suggest going outside and yelling it at the top of your lungs, if it is too much work, you will learn quickly.

-Nicknames
Feel free to give your dogs more creative nicknames. I have 4 dogs, besides Vaughn I have Bruno “Bear”, Arnie “pig-pig” (or something involving pig like “pig face” or “pigglesworth”), and Joey “Gremlin Head.” My husband comes up with nicknames for all of our fosters as well, which can be fun and silly (but they still have proper names).

-Not sound the same as other animals
If you have one dog named James and one named Jay, that is too close and can be confusing for them. Same goes with humans and dogs (had an adopter named Maddy and dog named Mandy and that was confusing for everyone).

-Not sound the same as commands 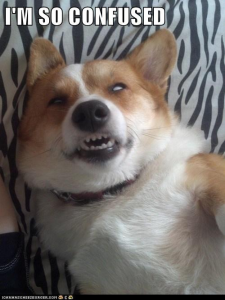 While Layla is a cute name, it can be super confusing if you use the command “lay.” Or Downy with “down” can get everyone confused.  So spend a few extra minutes to make sure that perfect name won’t make your dogs look at you like this!  Never had a dog look at you like you are insane before?   I have when an English speaker was telling a dog to “go” while living in China and it stared at her like she was stupid.  She thought the dog was stupid and I had to remind her that the word for dog in Mandarin sounds like GO! So she was yelling “Dog!” and he was looking at her like, “why, yes I am.”

-Give individual names
A standard dog name like Rosco, Fluffy, Belle and Buster can certainly make it more difficult for vets, groomers and others to remember them and keep their charts correct. This can be a huge problem if there are 2 dogs named Buddy at an office clinic this can be problematic if not dangerous.  Luckily for dogs, unlike people, they don’t have to worry if you get too creative with names. They won’t complain about not finding a key chain with their name on it (or tombstone) so don’t feel like you need to pick a name from the top 10 dog names. You don’t have to name your new dog the second it gets home so take some time and find the perfect name for them. 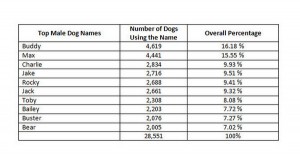 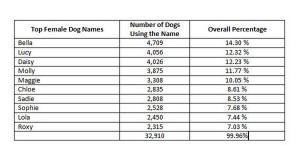 Examples of some of my favorite dog names (that I used)