“Your dog died, that sucks, you should have done more”: insensitivity in pet death

by Elsie LoddeFounder, Foster, and recently heart broken by the passing of one of her special needs friends.

Lately I have had several incidences with the death of my foster dogs. This is the unfortunate part of rescue which is inevitable.  During this process, it has reminded me how many people respond on social media with no concern at all for the person on the other side.  Losing an animal can be a devastating loss, and here are some ways to avoid sounding like an insensitive jerk.

Don’t ask questions:
This is one I saw a lot. People would ask, “who died?” “How did they die?” This is all a part of our morbid curiosity.  We can all admit this is not important to any of us, it has nothing to do with us,  and the outcome is the same; however, this morbid curiosity does come at a price to the person who is reeling from the loss.  Since the person who lost an animal is wrapped up in it, it is frustrating and painful to have to rehash what happened over and over again. So first of all, before you ask this question, check prior posts.  All else fails, take that interest and instead focus trying to offer condolences instead. 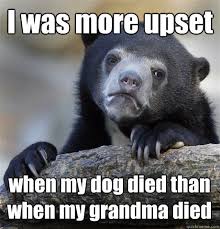 Don’t tell jokes:
I deal with sadness by covering it in a blanket of inappropriate humor.  I learned this from my Great-Grandmother, who told jokes about death at her husband’s funeral.  I loved that old bag, but one thing people need to understand is that it is rarely acceptable for you to make jokes at the passing of a loved one, and that will rarely be taken well.  No matter how much a person tries to not be serious, making a joke about how “ruff” it is when a dog died isn’t funny. Recently a friend of mine was asking for a vet close to her where she could put down her beloved 14 year old fur child.  Her normal vet was pretty far and she couldn’t bring herself to make that long drive knowing the outcome.  Her sister in law responded with “just make sure not to get him cremated. I heard on 60 minutes that was a scam.” I personally was appalled.  The question wasn’t what she should do with the remains, it was where to go. So instead of reaching out to someone who was pouring their soul about their heartache, she was met with matter-of-fact opinion which was not necessary.  To me it is the same if someone said “My dad is in a coma, I am so sad.” And someone said “Don’t take him to Morty’s Funeral Home, they are awful.”  Although I am sure her sister-in-law did not mean to be callous and rude, she was. If she asked about what people thought about cremating animals or what she should do with his remains, that would be another story.  I have come across this many times in rescue. I once a litter of puppies with distemper that were very sick, and put them to sleep, and then the next day someone (who thinks they know everything even though they know nothing about the situation) steps up and says “you should have given them (insert medicine here).” or “I will take them to my vet.” When the person involved is very saavy and an animal was under the care of a trusted veterinarian, your $.02 is most welcomed, in your pocket.   Providing information (especially right after the fact) is not helpful and can also exacerbate  the feeling of guilt and remorse.  Then putting the heart broken person on the defensive and not allowing them to grieve.  Just today, I saw a woman, who I went to high school with,  whose dog died yesterday of cancer. It wasted away at home instead. This is something I struggle with because I think people keep animals alive too long because either they do not want to pay the ridiculous cost of having them euthanized or are unable to let go.  Either way, saying “I cannot believe you did not have him put down humanely!” is the incorrect point.  Want to know what to say?

Saying “I’m sorry” or “that is awful” is better than asking questions. But better yet, how about tell the person how that their beloved pet was lucky to have such loving owners.  That they lived to be 14 which is amazing. How they look down upon you and stay with you forever. These are the types of words that bring people to happy tears.  Do post heartbreaking and uplifting songs, words, memes or whatever you can do. Sometimes good crying can be more healing.  Remind them of the good times they had, and always consider sending flowers or doing something special to cheer them up. Sometimes people forget that for many of us, we are bonded with our animals more than we are our family and friends. That they are family and their deaths should be treated with the same respect and love as losing a brother, mother or even crazy aunt.  So the next time you hear about the loss of an animal, make sure to consider the grieving person first, even if that means you never know what happened.

These are two pictures designed of the great Bowser The first one is such a cute picture of him, you cannot help smile, so that made me remember the good times (which is good).  The second was done by dOOdlemutt as not only memorial but to help raise funds for his care. The picture makes me very happy as I picture him looking down on us. A video was also made, which I also watched over and over again.  These are excellent examples of how people helped me with my grieving process (which I admit I am still in the middle of and many of these wounds are fresh not only for me, but others who have been in this situation.