“I will gladly spay you Tuesday for a puppy today” : the benefits and problems with juvenile spay and neuter.

By Elsie Lodde
Founder of RPNC as well as a self described crunchy dog mom and has the bladder like she gave birth to her dogs (confused? well read it)

Being in rescue, I have people several times a year try to talk me out of spaying or neutering their intended puppy. They tell me their vet recommends waiting until 6 months old to alter their new family member and ask me if I will reconsider altering that animal prior to placement. The answer is always the same. No. Of course my hands are tied by California law as penal code 30520 states, “no public animal control agency or shelter, society for the prevention of cruelty to animals shelter, humane society shelter, or rescue group shall sell or give away to a new owner any dog that has not been spayed or neutered.” Before I had access to vets who would do juvenile spays I would have foster-to-adopt contracts, but tracking down people to make sure it was done was complicated and more paperwork than I had time for. Finding clinics that would perform the surgery was complicated (Animal Spay and Neuter will do it for anyone, but it took some getting to the right place to get the SPCA to agree to do it since we are a rescue). The difficulty of finding someone to do the procedures would make you think that this is a bad idea, but as I am required to do it, I never thought too much about it. I think common sense would tell you it would be bad right? Imagine chopping the testes off of boys when they are still young and how that would affect them (ask the eunuchs of centuries past) but never looked into the research until now. I understand that much of the spay and neuter revolution is based purely on doing what is right for humans as overpopulation of animals have turned fluffy (and his 2.5 million ancestors) into pests and our dislike for the mass murders of homeless pets throughout the country (I promise no more rants). So today I am not looking at the benefits to spay and neuter at any age (those are well documented like avoiding over population, poor behaviors, and even pyometra) but specifically items related to spaying and neutering at an early age.What I find may surprise some of you and what will my recommendations (as a crunchy dog mom who is so distrusting of so many norms like vaccines and flea medicine)? I will tell you, but first let’s look at the research.

Where Does this Idea of Waiting Until 6 Months Come From? 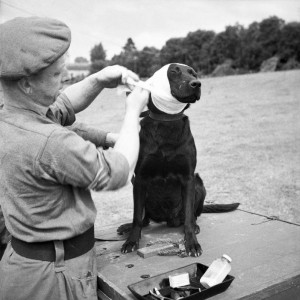 According to Dr Root-Kustritz, it is thought that the belief of waiting until 6 months of age dates all the way back to veterinary medicine from World War II, when “anesthetic and surgical techniques available at that time necessitated the animal be at least 6 months of age.” Clearly medicine has improved quite a bit since then, and we actually find that surgery is easier on younger dogs than older. This is very clear when we take our rescue dogs to be altered, puppies are up and playing that night where the older ones (even the 2 year olds) take a bit more time to recover. Why is this? According to the Small Animal Surgery Textbook, the reproductive tracts (like all of the body) are much less vascular in juvenile animals than adult ones. This is important because it “allows for an easier, faster surgical procedure and reduces the risk of excessive bleeding.” These faster surgeries also reduce the anesthetic risks but to add to it the textbook also states that juvenile animals metabolize anesthesia more rapidly and recover from its effects more quickly than adult animals. Lastly, the textbook tells us that that the tissues of juvenile animals are more resilient, resulting in faster healing and less post-operative pain and stress. (Source: Small Animal Surgery Textbook, 3rd Edition, 2007. Theresa Welch Fossum, DVM, MS, PhD, Dipl ACVS)

This resilience is very clear and is both great for us and can be problematic. Mainly only problematic because lack of scars in females cause us to bring in spayed females to be altered again (and why we love tattooing done in many clinics post spay). Dr. Freed DVM has a similar experience and finds, “When we neuter a male puppy we can’t even see the incision eight hours later.” It is a relief for fosters that because young animals are in a rapid state of growth they heal quickly and fosters find that ‘kittens and puppies wake up after surgery, bouncing, eating and playing with an abundance of energy, as if nothing even happened. Older animals are still groggy hours after the babies are fully recovered.”

One of the biggest benefit to female dogs to be spayed early is that is greatly reduces the risk of mammary tumors as they age. Compared with bitches left intact, those spayed before puberty have a 0.5% risk of developing mammary tumors, those spayed after one heat cycle have an 8.0% risk, and dogs spayed after heat have a 26.0% risk of developing mammary neoplasia later in life. These figures are quite astounding to me, one heat cycle alone increases the chance of mammary tumors 1600% and a 5200% increase after two heat cycles. These numbers are truly shocking to me and this alone might scare me enough into believing in early spays.

Health Problems Associated with Juvenile Spay and Neuter
Some of the concerns I read about were entertaining to say the least. Concern about penis or vulva size (as if a small penis or lack of hanging ball skin is on my dogs’ minds!) was often discussed. I hear people say it will make dogs smaller, but as someone whose last dog was altered at about 7 weeks (we thought the crazy thing was older!) I can say I am confident his long legged body was only stunted in the aforementioned penis department. Some of the legitimate concerns (yes, I am rolling my eyes at you who think your dog cares about the size of the sex organs they aren’t using is) I saw addressed the most included knee problems, hip problems and issues with bladder leaking.

I hear people talk about stunting growth of animals (because that is what would happen to the eunuchs I mentioned earlier) and for some reason many veterinarians erroneously believe that pediatric spay/neuter will stunt the growth of animals. When in fact, the exact opposite is true (which has been shown by many studies). As the growth plates do not finish forming until after prepubescence, dogs who are altered earlier tend to be taller than dogs altered after this mysterious 6 month mark (although they also tend to have less muscle mass). However, there have been some research that finds that CCL rupture occurs more frequently in female dogs spayed early needing knee surgery. The reasons for this is unknown as there have not been any studies that have shown that delayed closure of the growth plates of the long bones results in asynchrony and/or abnormalities in joint formation as a cause of CCL rupture in dogs. Lila Miller, DVM

One of the biggest concerns is with hip dysplasia in later life for juveniles who are altered. In fact, the long term Cornell study did find that puppies that underwent pediatric spay/neuter before 5.5 months of age had an increased incidence of hip dysplasia. However this information can be confusing as this study also found that dogs that were altered at the traditional age were actually three times more likely to be euthanized for the hip than those puppies who were altered (Miller, 2014). Which led to the conclusion that although the group altered earlier were more likely to get hip dysplasia that dysplasia was less severe than those who were altered as adults.

One concern I saw addressed regularly in my readings involved incontinence with female dogs who were altered young. This I actually found all sorts of different answers to as some believed it was a problem, but The long-term Texas A&M study did not find similar results about urinary incontinence, and another study from 1992 showed a higher incidence of urinary incontinence in female dogs spayed after the first heat cycle (Miller, 2014) leaving me even more confused on whether this was an actual concern or not. All I know, as a 35 year-old-woman, who hasn’t been spayed or had children, I think these issues are probably more common that we know!

How Does Pediatric Spay and Neuter Affect Behavior?

Nothing I find more frustrating that bringing in a foster dog who goes around marking the furniture or even the foster dad! This marking behavior is not something you see in juveniles who are neutered. Every time my 8 year old bulldog decides to lift his leg on other dog’s crates or pens I shake my fist at his first owners who did not neuter him (well he was chained and never socialized so really in the scheme of things that isn’t the only reason I want to shake my fist at them). Cesar’s Way magazine, Dr. Sherry Weaver DVM asked about pediatric spay and neuter and she said that in her experience, “dogs neutered under 6 months develop less obesity and don’t establish some of the ‘male’ behaviors that neutering is meant to treat. They are also less likely to jump a fence, fight, or get hit by a car.” These male behaviors she is speaking of include marking and dominant behaviors.

Recommendations by an Untrained Professional
People always ask me what I think; I think every pet owner should do the research and decide what is best for their animals. As long as you are not accidentally (or purposefully) adding to the overpopulation problems we are facing then I say do what you think is best. Seeing so many females with mammary tumors, pyometra and just paying $1,500 for a C-section 2 weeks ago (that was the discounted rescue rate), I think better safe than sorry and fix your dogs. I think big hairy testicles are disgusting and marking is a behavior I cannot stand (the same for females bleeding) so I do not find any compelling reason to NOT spay and neuter (unless your dog is sick and cannot be safely put under anesthesia). Since most of us have poor psychic skills trying to walk the fine line of waiting to spay until 6 months and trying to catch it before the first heat cycle, I say pay attention. Although I have to alter all the dogs we adopt out, waiting until 5 or 6 months seems to be fine. I really find no evidence to say 4 months is better than 6, but in my experience the younger they are, the sooner they recover so make sure to not wait too long.

Recommendations from someone who actually knows about veterinary medicine:
Dr Root-Kustritz has these recommendations for you based on her research (which isn’t the same as mine)