Sometimes it is amazing what you can learn on FB and what messages the universe can send you. Yesterday, while perusing Facebook, I saw a really cute picture of an opossum and I took the time to read it. I have always actually wanted a pet opossum and in my early 20s, completely killed my car swerving to avoid hitting one. Now, I know they creep most people out, but I grew up with pet rats so I don’t find them as creepy as most. I also used to have a FB friend with a pet opossum and once you see one dressed in a Batman costume, I promise, you will find newfound respect for them. Last night, one of my dogs went running down the stairs and out the back door (which isn’t usually open) knocking over the puppy gate. So I got up, made sure all the puppies were in the house but I was not able to find one. I went outside looking for the one puppy, and while doing this, I saw an opossum lying on the ground in the far part of the yard. Joey had ran out there, and was just looking at it. I immediately went inside, counted the puppies (they were all there), locked all the dogs inside and got my husband, to help. Went out there with my phone (flashlight) and we could tell she was alive so we decided to leave it alone and assume it would stop “playing possum” and leave. I did do some research on possums on the internet and learned some really fascinating things (like the embryos crawl into the pouch and grab a nipple and the nipple grows into the mouth). Someone else who has dealt with these before also mentioned a man bringing the skin of an opossum with the babies attached. 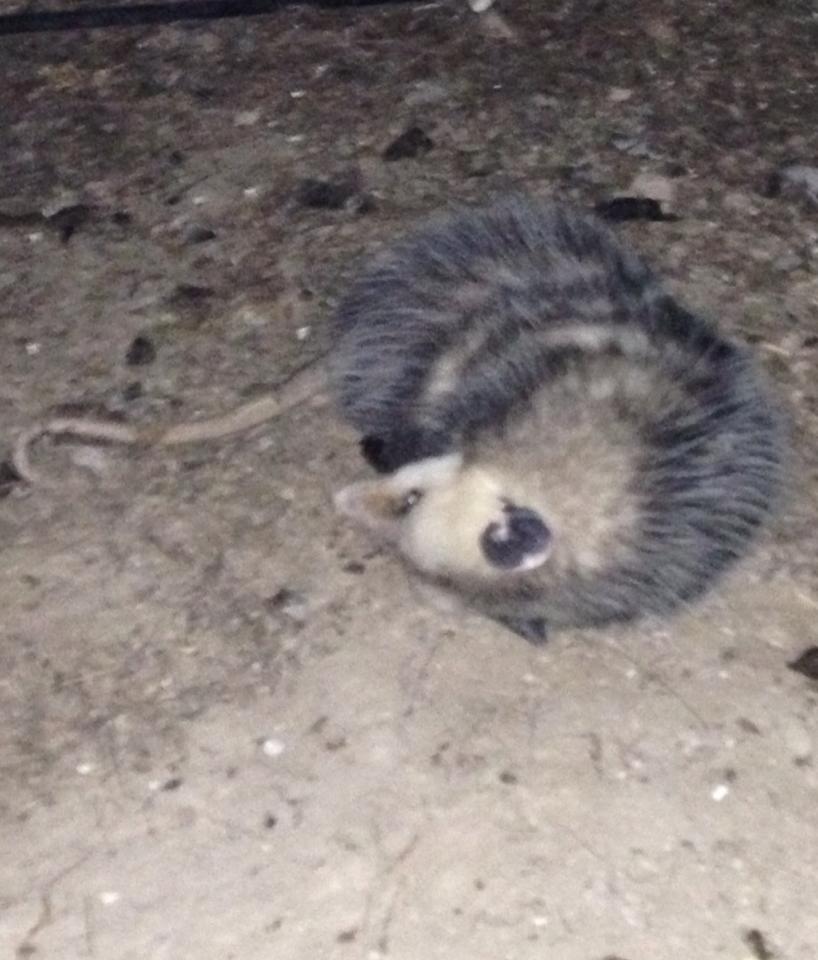 6 hours later, I woke up for a busy morning, and made sure to go outside to check on the possum before letting the dogs out, and sure enough… it was dead. Having seen the flier about it being opossum breeding season, I went and grabbed our fireplace gloves and picked it up and took it inside the house. Needless to say, my husband was very angry with this, but I put it on the tile floor and thought I should look for a pouch to see if it had babies. Of course it did! Why else would I have read that flier the day before (thank you universe)? So remembering what I learned I tried to remove the babies (who were moving around and pretty cold). I know with puppies a cold puppy is a dead puppy so I was in a hurry to get them out. I went to my counter, found a pair of cat nail trimmers and went back and pulled the squiggling pink thing and cut the nipple off with the cat nail trimmers and then shoved the cold pinkie in my bra. I did this another 7 times and left the 3 dead ones inside. I went out to my doggy shed, found a plastic bin and a heating pad and started that warming while I went to warm goat’s milk (I DESPISE puppy/kitten/human formula as it is just oil and corn starch- nothing healthy about that!). I googled caring for orphan possums and found that they are fed using an eye dropper so I went to get a pipette and then proceeded to pull a much warmer baby out of my bra. I had to forcibly remove the nipple out of its mouth and then try to put some of the warm milk in its mouth. Only to find they really can’t open their mouths at all (which I now know to be true) so it wasn’t easy to try to get milk in them and not just all over them. After hoping I got at least some in them, I put them in a blanket on the warming pad, and rushed around to get ready for my busy morning of dog rescue before work.
You know you are a rescuer when: So I now do not have time to take a shower, but rush to the bathroom to remove the possum poop from my chest and look at the mirror and actually find a nipple in my hair! Just hanging on, this piece of flesh that resembles a spaghetti noodle. Sometimes I feel like my life is a tv show because who does this happen to in real life? Well I left in a hurry to get to both SPCA clinics this morning (one for the litter of puppies I delivered in my car 10 weeks ago and then for a dog from a homeless encampment) while managing the pick-up of another homeless person’s dog to be taken as well. Luckily I have an inverter that was donated in my car, so they were nice and warm. 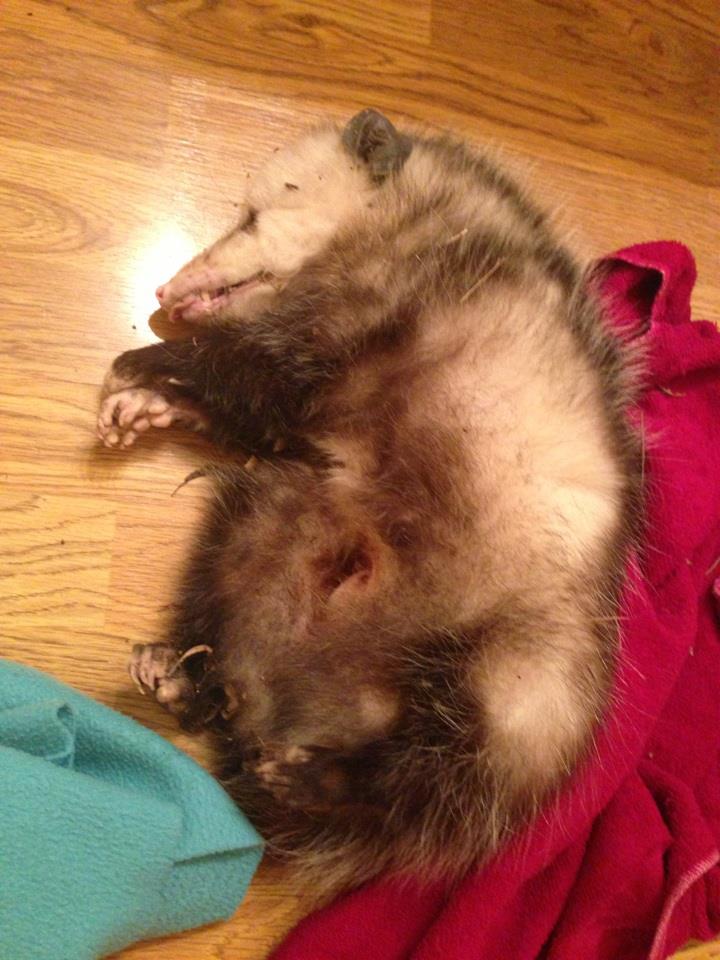 Some of my co-workers were really interested in trying to help. One volunteered at Wildlife Care Association (WCA), and one in Europe where she bottle fed ferrets. But we were having little luck getting them to get milk in their bellies. Luckily by this time the WCA was open and so I called and they instructed to bring them down immediately, I wasted no time in this.

What I learned: I learned caring for opossums is not as easy (for me) as puppies, although, I would love the chance with older ones with hair. I basically have learned everything about opossums in the last day as well, and really find them fascinating. They are our only marsupial yet people really treat them like they are ROUSs (Rats Of Unusual Size as quoted from Princess Bride) when they are really very cool and complex creatures. For example, they are immune to rabies, so you don’t need to worry about that (but they are covered in mites and fleas!). On a more personal level, I am reminded that I amazing under pressure and not just with things I am confident in, like caring for dogs. Every time something new like this comes up, it shows me what we can do as humans and I love the learning experience. 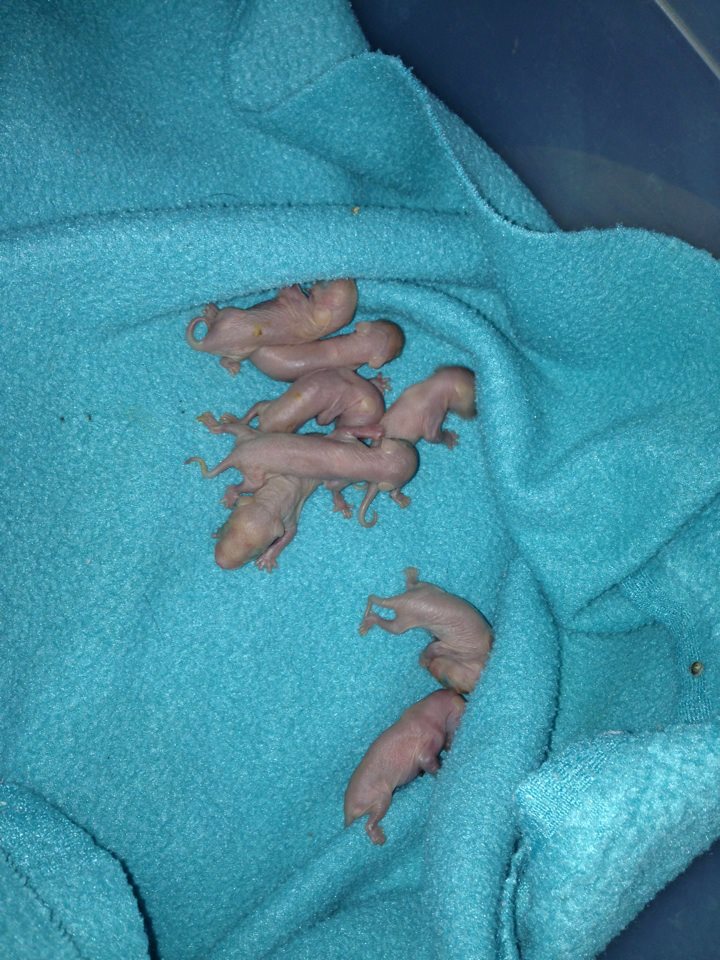 I am not sure why this possum showed up in my yard or why it died (no visible signs of trauma), but I am glad she did so in my yard so her babies have a chance. So please, if you find a dead opossum, take the time to check to see if there are babies, you could be a hero (for up to 13 babies).

Found baby possums? Check out this website: http://www.messingerwoods.org/babypossum.htm
Make sure to contact your local wildlife rescue, and until then, keep them warm.